Diving into the Rhine with Wagner 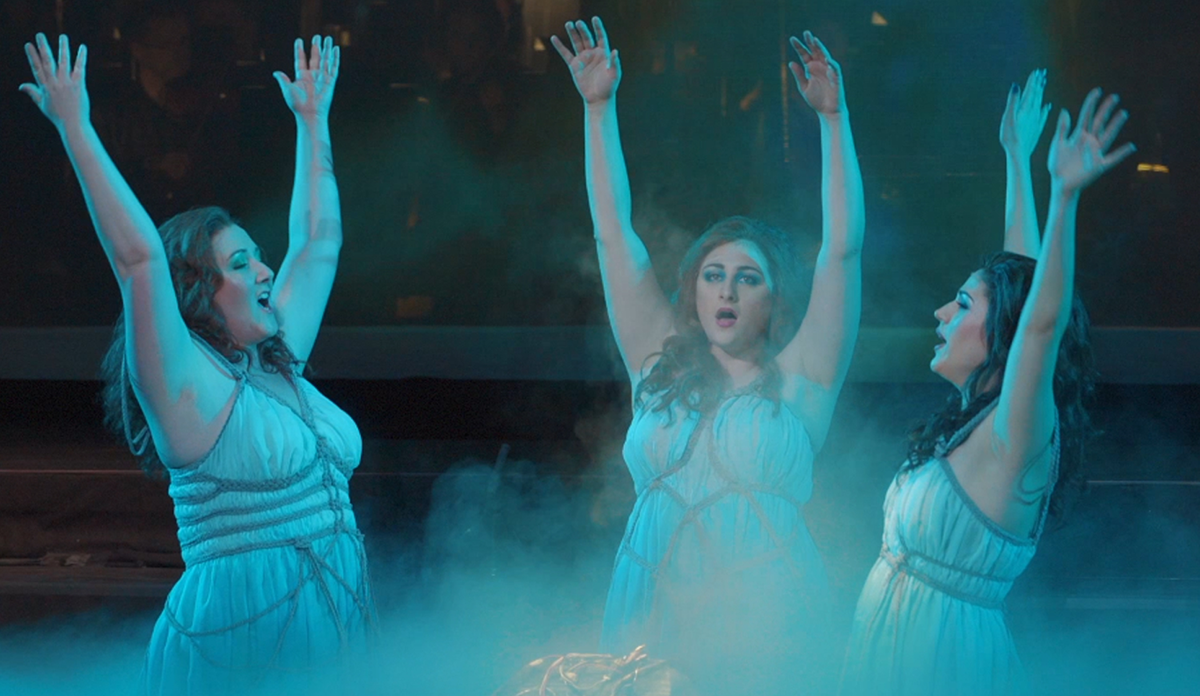 It's likely composer Richard Wagner would have wholeheartedly embraced Arizona Opera’s upcoming performances of Das Rheingold, which honor his all-encompassing theatrical vision with an onstage orchestra surrounded by intricate projections. Wagner wrote his own libretto -- based on Nordic mythology -- in pursuit of a seamless aesthetic integration of music, dance, visual art and poetry, and the opera premiered in Munich in 1869, although the composer was dissatisfied with the scope of the production.

“The challenge for anyone doing Wagner is that it’s just so vast,” says Das Rheingold stage director Brian Staufenbiel. “The orchestra is so big, and you need a space that’s large enough to allow you to put this show on.”

In 2016 he created this version of Das Rheingold for Minnesota Opera, which wanted a full production but couldn’t fit a large-scale ensemble in the orchestra pit. “It’s not Wagnerian to feel like you’re having an intimate experience because it's usually so giant,” says Staufenbiel. “Integrating the orchestra -- having it so present in the piece -- and reutilizing the pit as a playing area for the singers was exciting.”

“We decided to put the orchestra in the context of the sets, so they create a kind of physical texture...while they’re playing with lights on them they become a part of every scene, creating this wonderful energy and a wave of movement in the sets themselves,” he explains, describing the staging.

There's a big hanging suspension bridge, which is the mountain site outside of Valhalla,” Staufenbiel continues. “For the opening scene the pit is filled with low-lying fog and then treated with light so it feels like it’s water; the Rhinemaidens are basically swimming in front of the orchestra. The pit also becomes the underworld in scene three.”

“It was a bit of an experiment,” recalls the director. “Some of the singers are actually over the orchestra, suspended on that bridge. We split [the ensemble] in half with an angled ramp and terraced them with risers.” 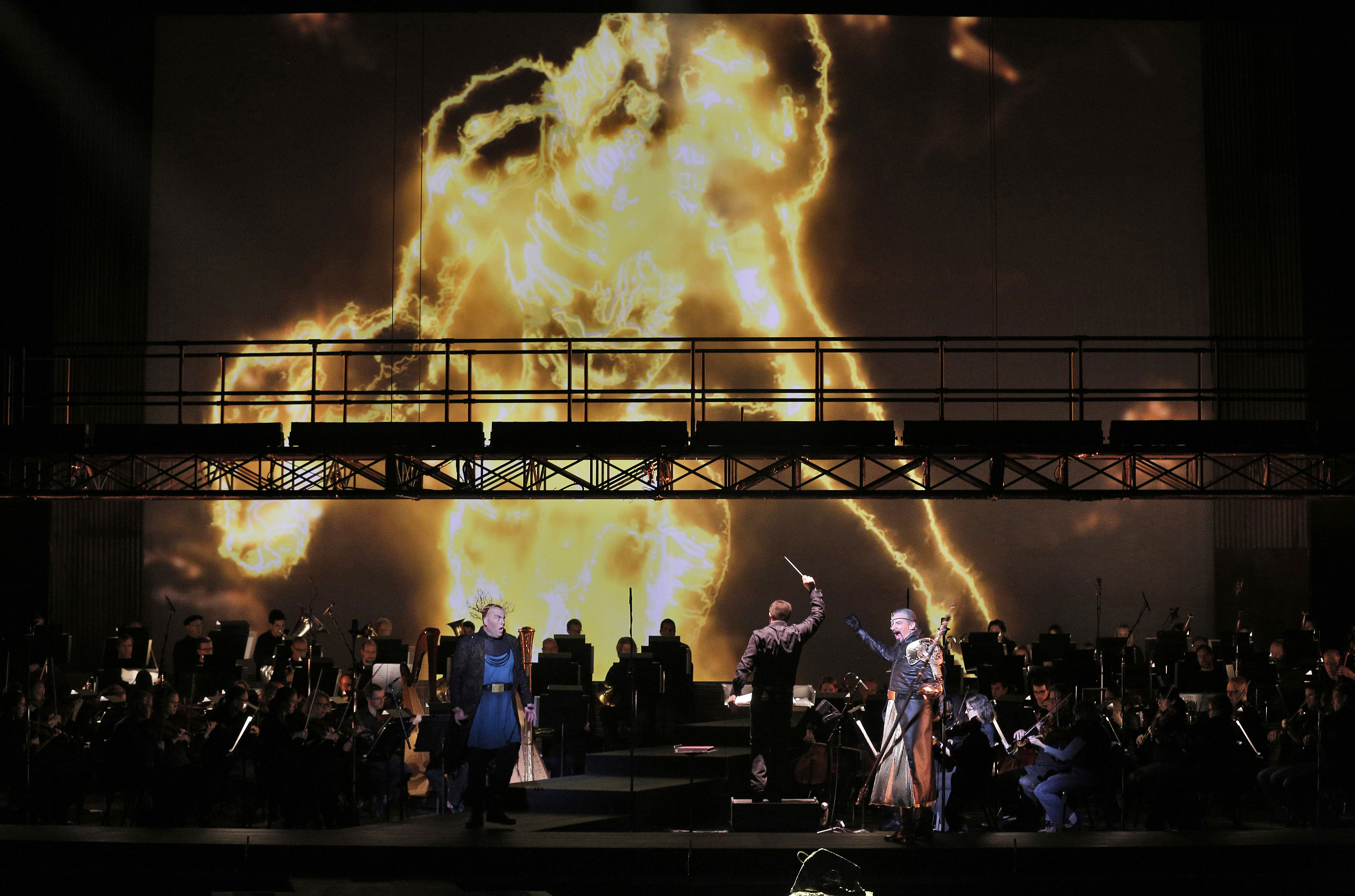 Glorious modern visuals are far more interactive than the scenery which so disappointed Wagner. “I’ve been experimenting over the years with different types of video technology, trying to create environments that really support the storytelling onstage,” says Staufenbiel. “Now projectors are a lot more affordable, better, and stronger, and all levels of technology are improving including the software.”

With the same multi-media technique he used for the operas Wozzeck, Gatsby and Ainadamar the director works with projection designer David Murakami to create vivid animations. “We go through every measure, every moment in the opera and storyboard what the media will be doing, like a movie, because so much of it is alive,” says Staufenbiel. “We’re both front projecting and rear projecting, so [for example] during Donner’s storm scene we’re able to create a real three-dimensional quality with the clouds blowing around.”

The video synchronizes with the opera’s music and action through a series of cues similar to those which trigger lighting effects, with crossfades across video layers and the capability of creating astonishingly specific and detailed projections.

“I approached this opera the same way I would approach any opera,” says Staufenbiel. “How do we make it more intimate?” He continues, “I think because of their daily lives and having these little screens right in front of them, people are looking more and more for intimacy in the storytelling -- that was the challenge.”

“I wanted this still to be a story where people came away and they felt like they knew the characters,” the director explains, describing a specific scene of betrayal in Das Rheingold. “And I had many people say, ‘Oh, that’s the first time I really felt sorry for the giants.’ And you should! They’ve been duped -- they’ve been treated terribly. They’re men who thought people were going to keep their word.”

Staufenbiel hails from San Francisco, where he’s served as creative director and stage director for Opera Parallèle since the company’s inception in 2007. His innovative recent productions include Jonathan Dove's Flight and Les Enfant Terribles by Philip Glass, introducing experimental cross-disciplinary elements (dancers, multi-media components, unusual instrumentation and circus performers) into opera. Staufenbiel has also directed the opera program at the University of California, Santa Cruz for more than 17 years.

“Wagner ushered us into the modern era, so there’s a deep connection to my work,” he says. “A lot of the stories I tell are surreal and different and magical and mythical, so it felt like it was a natural fit to me -- and I love his music.”

“It's been 20 years since our last Ring Cycle presentation,” says Arizona Opera president and general director Joseph Specter. “This is definitely a chance for us to not only welcome new people who might like Game of Thrones and J.R.R. Tolkien but also people who are devoted to the Ring.” He adds, “This is a visually stunning production using the LED video wall that we premiered for Riders of the Purple Sage.”

"Das Rheingold is the prologue that sets up the Cycle,” says baritone Richard Paul Fink, who sings the role of Alberich, one of a race of gold-hoarding dwarves known as the Nibelungs. “Wagner is a true master -- everybody and everything in the Ring Cycle has its own musical motif.”

At 64, Fink continues to bring great physicality to the role. “When I started Alberich it was just a natural fit -- I could ham it up,” he says. “As a kid I used to do a lot of pratfalls and stunt work -- taking dives and jumping off things, rolling and flipping." Fink adds with a chuckle, "In my neighborhood we used to have a competition to see who could fight the invisible man most convincingly.” “Alberich goes through such an emotional and dramatic journey through the piece,” he explains. “He starts off in the first scene chasing these three Rhinemaidens, and he’s just a joe who’s trying to find himself a girl, spurned by love...and he decides, ‘Well, if I can’t get it, I’ll buy it.’” Fink adds, “And then as he amasses the gold and builds up power, the ring becomes this drug, powering him on. He’s carrying this angst, and that drives him through the whole rest of the Ring cycle.”

“Wagner knew the voices he was writing for, because there are moments when I will be singing a capella up there,” says the baritone. “When he puts it in a really strong place in my voice, OK, yeah, he’s got the orchestra going full tilt. But when it’s a moment that says, ‘Let’s back off just a little bit, and let’s bring the people off the edge of their seats,’ and then he turns around and goes ‘boom!’ and hits you with a dramatic moment...He never lets you down -- he always keeps you.”

Fink continues, “He’s such a scenic painter with the music that you literally feel the vibration through the stage when the orchestra starts, and then it turns into the waves of the Rhine River, and it just comes up and builds until you hear the frolicking of the Rhinemaidens.”

“I look forward to every production of the show,” he adds, “because I just have a ball doing it. I’ve performed Rheingold close to 130 times, but I’m constantly finding something new.”