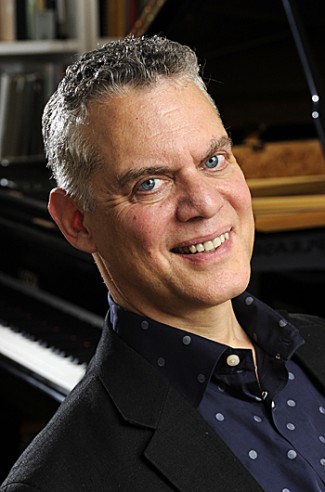 This blog post is the first of three posts from General Director Ryan Taylor, which chronicle the inspiration to bring Arizona Lady to the stages of Tucson and Phoenix this October.

Although he doesn’t write the songs that make the whole world sing, Steven Blier rediscovers, revitalizes, and reveals some of the best vocal music available to modern audiences anywhere in the world. This October, Arizona Opera presents Arizona Lady, an exuberant operetta by Emmerich Kálmán, and without Steven Blier, it might never have happened.

For those who don’t know Steven, he is a brilliant and multi-faceted Grammy-winning artist; he is also a pianist, researcher, speaker, storyteller, visionary, and comedian. He is co-founder of the New York Festival of Song, a frequent performance artist around the country, and instructor at the Juilliard School in New York City. He liberally and selflessly shares his passion for vocal music of all genres with countless artists around the globe, inspiring legions of us with his heart, his wit, and his wisdom.

In June of 2009, I was fortunate to be on the edge of my seat for a performance that Steve created at the Wolf Trap Opera called “Road Trip!” The energetic, talented cast featured Ava Pine, Jamie Barton, Dominic Armstrong, and Daniel Billings. One of the pieces which was permanently fixed in my memory from that night was the opening chorus of a little-known operetta called Arizona Lady. I was fascinated by the music – its melody, although foreign, was instantly familiar and full of life. I was transported immediately into what seemed like a musical from the Golden Age of Hollywood, with lyrics in German and the occasional outburst in English of “Yippee Kay Yay” and “Cowboy!” Everyone in the audience that night no doubt remembers how delicious the performance of this piece tasted to our ears, and how much self control it took not to leap out of our seats and dance along with the cast!

Arizona Lady: Bringing a Classic to the Stage

Fast forward three years…in 2012 I was moving to Arizona, and in the middle of unpacking I found the program from “Road Trip!” Now that I lived in Arizona and worked for Arizona Opera, I wondered if this piece of music from Arizona Lady could steer the organization in a new direction artistically? Could we capture new attention and the bold spirit of our state with a joyful performance of this amazing piece of music? We decided to open the Arizona Opera Center with artists from the Marion Roose Pullin Arizona Opera Studio singing the opening chorus of Arizona Lady. All the guests in attendance that night laughed and began asking, “What is this piece? This is incredible!” By the time the Studio Artists launched into the second number we had found from Arizona Lady, guests began to clamor, “We need a new state song!”

Bringing this classic to the stage at that point began to feel inevitable. It has been an incredible journey I won’t soon forget, and this hotly anticipated Arizona Opera production all started with Steven Blier. My mind reels trying to imagine how many people on our tiny blue globe are benefitting from the inspired genius of my friend and mentor, the guy who makes the whole world sing.