Opera is all about telling compelling stories through music. Most of the stories you see on stage are inspired by great literary works, historical events, legendary people, or better yet, current issues. Whether you are a Book Club regular or joining the group for the first time, we are excited join us this season.

In an exciting collaboration with Pima County Public Library, we will bring you book recommendations to enhance your opera experience for the Arizona Opera's 2022/23 Season.

All book club activities, announcements, meetings, and more will be announced via our new Facebook group. We invite you to participate, post, and discuss each book with us as we discover these new titles together.

Don’t know how to join our group? It’s easy! Follow the steps below:

If you do not have Facebook and do not wish to join, we will also be posting information and updates to this page so stay tuned!

All Book Club activities, announcements, meetings, and more will be announced via our Facebook group. If you are not part of Arizona Opera's Book Club Facebook Group and would still like to participate in our virtual book club meetings, please send an email to Courtney Clark, Director of Community Alliances, at cclark@azopera.org.

A powerful story of service and sacrifice, based on interviews with returning soldiers at the Walter Reed National Medical Center, The Falling and the Rising takes place largely in the mind of a soldier following a roadside attack. Follow her through a coma-induced dreamscape as she has powerful and moving encounters with fellow service members. 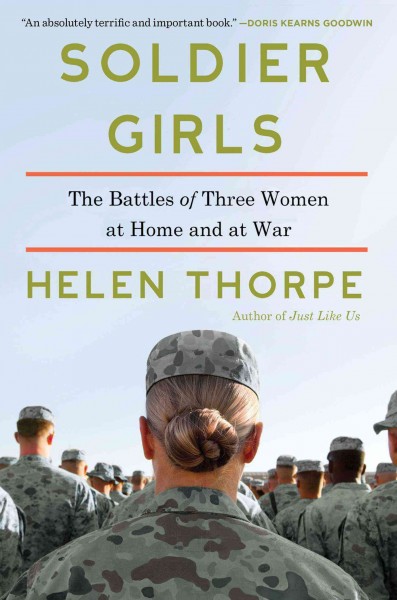 “In the tradition of Adrian Nicole LeBlanc, Richard Rhodes, and other masters of literary journalism, Soldier Girls is utterly absorbing, gorgeously written, and unforgettable” (The Boston Globe). Helen Thorpe follows the lives of three women over twelve years on their paths to the military, overseas to combat, and back home…and then overseas again for two of them. These women, who are quite different in every way, become friends, and we watch their interaction and also what happens when they are separated. We see their families, their lovers, their spouses, their children. We see them work extremely hard, deal with the attentions of men on base and in war zones, and struggle to stay connected to their families back home. We see some of them drink too much, have affairs, and react to the deaths of fellow soldiers. And we see what happens to one of them when the truck she is driving hits an explosive in the road, blowing it up. She survives, but her life may never be the same again.

Deeply reported, beautifully written, and powerfully moving, Soldier Girls is “a breakthrough work...What Thorpe accomplishes in Soldier Girls is something far greater than describing the experience of women in the military. The book is a solid chunk of American history...Thorpe triumphs” (The New York Times Book Review).

View other selections for The Falling and the Rising

A wealthy gentleman in Vienna commissions two pieces of entertainment as an after-dinner treat for his guests: a dramatic tragic opera and a comedy by a troupe of actors. Unfortunately, the dinner is running late, and the two ensembles are forced to perform on stage together, at the same time. Ariadne auf Naxos delivers a deliciously theatrical mix of humor and exceptionally beautiful music, bringing surprise and delight at every possible turn.

Set in 19th century Rome during the Napoleonic wars, Chief of Police, Baron Scarpia, has long lusted after Rome's diva, Floria Tosca. When Scarpia suspects Tosca's lover, Cavaradossi, of assisting an escaped political prisoner, Scarpia seizes the opportunity to kill two birds with one stone. He will manipulate Tosca into revealing the prisoner's hiding place and Cavaradossi's involvement and have her for himself.

The Sound of Music

Based on the 1949 memoir, The Sound of Music tells the story of Maria, who takes a job as governess to a large family in Austria. She falls in love with the children, and eventually their widowed father, Captain von Trapp. He is ordered to accept a commission in the German navy, but he opposes the Nazis. In order to save his family, Captain and Maria must make a difficult decision that could alter all of their lives.

Mozart expertly combines the human and the supernatural, along with comedy and romance, to draw us into a world where a prince, assisted by musical instruments enhanced with magical powers, goes on a quest to rescue the princess. Triumphant over every obstacle in their search for truth and enlightenment—in the end—the young couple are united in love and happiness.