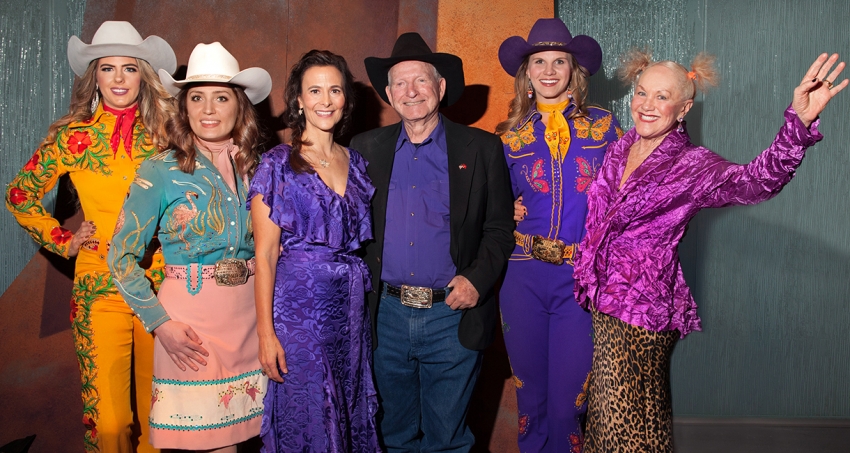 Riders of the Purple Sage: The Making of a Western Opera premiered Feb. 5 at Scottsdale Center for the Arts. The film is a documentary about the artistry behind Arizona Opera’s Riders of the Purple Sage. The opera marks a collaboration between the work of author Zane Grey (1872–1939), American composer Craig Bohmler and librettist Steven Mark Kohn, and Arizona’s “visual poet laureate,” painter Ed Mell. The opera is the first time Grey’s work has been adapted for the live stage.

More than 700 people attended, including the artistic team from the opera and Scottsdale Mayor Jim Lane, Vice Mayor Kathy Littlefield, Councilwoman Suzanne Klapp and Councilman Guy Phillips. Prior to the screening, guests enjoyed an informal cocktail reception and took photos in front of one of the set pieces designed by fine art painter Ed Mell.

Emcee Dennis Ford, from Quantum Leap Productions, welcomed attendees, quoting Winston Churchill. “The arts are essential to any complete national life.” Marshall Trimble, Arizona’s official state historian and a trustee of Western Spirit: Scottsdale’s Museum of the West, title sponsor for the event, said, “Our Western heritage is important to us because we have a hunger for heroic past and the West provided that.

Billie Jo and Judd Herberger served as honorary chairs for the event. “Right from the start, Judd and I liked the energy of Riders of the Purple Sage and felt it was special because it brings together so many arts and artists. We knew it would be a significant work of art for Arizona,” said Billie Jo.

Two-time Emmy Award-winning filmmaker, director and producer Kristin Atwell Ford told the audience, “I have the honor of representing over 200 people who have made this film possible and many of you are in the audience tonight to witness what we have created together.”

Joseph Specter, president and general director of Arizona Opera, says “Riders of the Purple Sage absolutely transformed our organization and our community’s perception of our art form.”