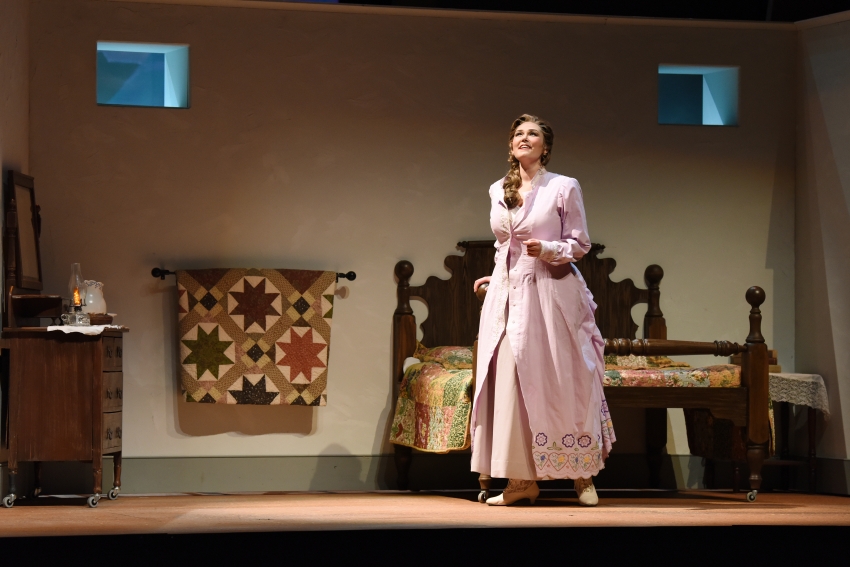 On February 29, 2020, Arizona Opera presented Craig Bohmler and Stephen Mark Kohn’s opera “Riders of the Purple Sage,” a revival of the production seen and much appreciated there in 2017.

The opera, “Riders of the Purple Sage,” adapted from Zane Grey’s novel of the same name, tells of Jane Withersteen’s fight to keep her property when Mormon Elder Tull wants to make it his by marrying her. The story takes place in in 1871 in a part of Southern Utah where neither federal nor state law had yet been established.

Fenlon Lamb’s stage direction tells the story in a no-nonsense manner that allows those who had not read the novel to understand the many-faceted plot. Jane, in particular, gradually changes her mind about her church and its people and acts accordingly.

Kathleen Trott’s costumes for women represented the time and their stations in society; there were bustled dresses for Jane and a simple poncho for Bess. She dressed the men in classic western wear with hats and guns. Fight Director Andrea Robertson organized realistic fight sequences in the opening scene, especially during the scene where Venters shoots the rustlers and the Church scene.

After a short musical statement, the curtain opened on Jane’s ranch. Elder Tull, sung by mahogany-voiced baritone Keith Phares, is harassing her by insisting her head rider, Venters, is a criminal who deserves punishment. Their dialogue becomes more intense as a stranger named Lassiter, sung by powerful baritone Christian Bowers, arrives and frees Venters by holding his captors at gunpoint. Although no horse can be seen, Bohmler writes the galloping hoofs into the music.

At this point, Jane, interpreted by Kaitlyn Johnson, is just beginning to realize that Elder Tull and his followers are not God-loving men and do not represent her religion as she knows it. Johnson has a strong dramatic voice and the kind of acting skills that showed her character’s growth from one scene to the next.

Bille Bruley was an energetic Bern Venters who fought credibly with his captors. After vocally surmounting huge orchestral surges, he left to find Jane’s stolen cattle and the masked rider who helped steal them.

After a 20-minute intermission, the curtain rises on Jane communing with her late father. Lassiter tells her a stampede is approaching and he rides out in an attempt to change their direction. Again, the hoofbeats of cattle and horse are conveyed by the orchestra and the ranch is saved. The next scene shows Venters shooting rustlers. His bullet has grazed the masked rider, and he realizes his victim is a young woman, Bess, sung by Cadie Jordan. Venters and Bess sing harmoniously and fall in love as they hide from the rustlers.

This opera demands the Wagnerian voices readily supplied by Johnson and Colclough. Eventually, Johnson and Bruley, who are currently members the Marion Roose Pullin Arizona Opera Studio, can be expected to sing dramatic roles in larger houses.

At the end of the second act, Lassiter finds out that Bishop Dyer’s people abducted his missing niece. In the third act, after Dyer preaches to a pleasantly harmonic choral congregation, their hymns provide a bit of respite from the stark drama of the situation at the Withersteen ranch. When Lassiter appears, church goers run to hide and mayhem breaks loose, but Lassiter has had a change of heart and he brings his guns to Jane.

At the end of the opera, Elder Tull’s men pursue Venters and Bess as well as Lassiter and Jane. Venters had long expressed a desire to start a new life in Illinois and even Jane realizes that she cannot expect to live in peace on her Utah land. If they can get away from Elder Tull and his pursuing followers, they will be able to start new lives in Illinois.

Lassiter knows where to find a huge rock balanced precariously on a nearby mountain peak. He puts his shoulders to it, knocks it off its pedestal, and it starts a landslide down the side of the mountain that halts Tull’s pursuing posse. This time the audience did see projections of falling rocks and it seemed as though the landslide had hit the theater.

Before the opera started, the audience heard a bit of Navajo-styled flute music and it set the mood for a story set on land near Utah. Chorus Master Henri Venanzi’s group provided Mormon-style hymn music to place the people firmly on their land.

Conductor Joseph Mechavich, known for his ability with both traditional and twenty-first century opera, gave a rousing performance of this exciting new work. Arizona Opera is beginning attract attention with its new repertoire.

“Riders of the Purple Sage” was Arizona Opera’s first world premiere but next season the company is planning another, Clint Borzoni and John de los Santos’ “The Copper Queen.”