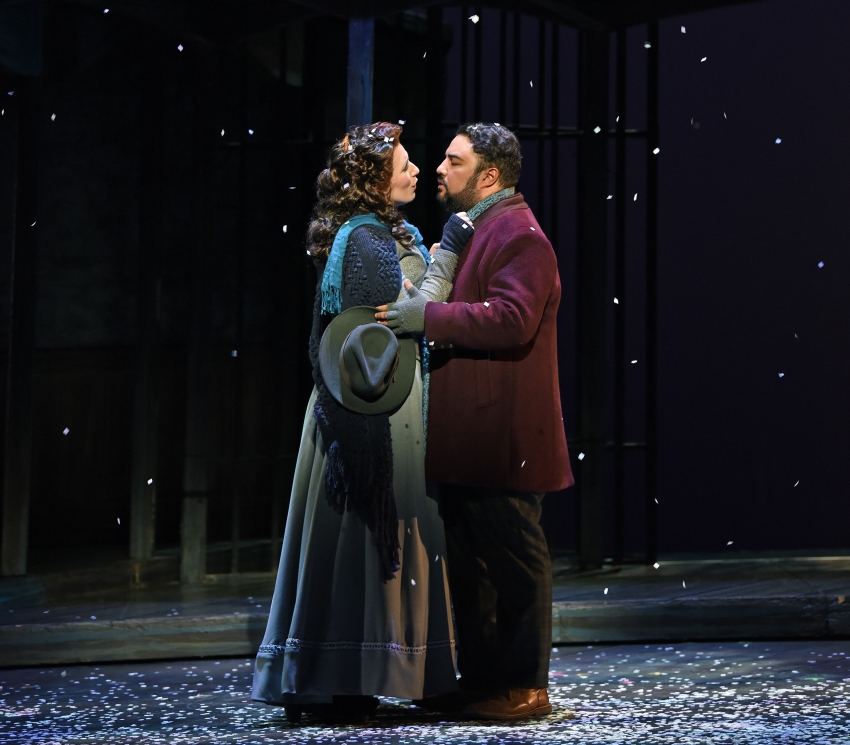 When the curtain opened, Stage Director David Paul and Scenic Designer Peter Dean Beck gave us a two-level garret that would return for the last act. In it, he did not use what I guess was merely a sleeping loft on the upper level. This construction is actually part of a most effective unit set that formed the second act hillside street, and the third act gate.

At Friday night’s performance, we saw a young energetic cast, most of whom were not long out of school, and Paul’s first act staging had the audience laughing heartily at the roughhouse antics of the young men who lived in the garret. Henri Murger, the author of the “Scènes de la Vie de Bohème” who actually lived the Bohemian life, showed us the chasm between young idealism and reality, an aspect of life that Puccini himself experienced as a conservatory student rooming with fellow composer Pietro Mascagni.

Throughout this performance, Paul brought this masterpiece to life illustrating the vitality and playfulness of youth combined with the fragility of life among poverty-stricken students. Kathleen Trott’s costumes carefully denoted the time in which the story took place and she dressed the chorus as individuals and families out for Christmas Eve.

However, she failed to call any particular colorful or stylistic attention to Musetta’s dress as described in her aria.

I have seen Mario Chang as Rodolfo several times, including last summer in Santa Fe where he seemed a bit tentative. This time he was much more secure and, except for the last note of Act one which he sang very softly, he gave a full-blooded performance of the young writer whose book on Bohemian life would bring him lasting fame. His love, perhaps even obsession, with Mimì retained the onlooker’s interest in his changing emotional status.

Having experienced Ellie Dehn’s flirtatious Mimì in San Diego a few years ago, I was expecting a good performance. She has, however, grown in the role and last night her radiant voice bloomed more mellifluously than ever.

She was a Mimì who kept the audience invested in her characterization, sang a beautifully poignant “Addio senza rancor” in Act three, and brought out the handkerchiefs with her inevitable escape from the sad realities of earthly life in the Act four. A singing actress of prodigious talent, Dehn’s portrayal made Mimì a memorable living character for the Phoenix audience.

As the painter Marcello, Joo Won Kang’s booming baritone made him sound like a man who could control his emotions in Act one. But with the appearance of his old flame, Musetta, in Act two, the audience realized that he was simply clay in her hands and she could do with him whatever she liked.

By Act three, he was the target of verbal abuse, but Stage Director Paul allowed the character to redeem himself in the last act when Musetta treated him with more respect.

Marion Roose Pullin Arizona Opera Studio Artist Kaitlyn Johnson was a strong-voiced coquette as Musetta. She built a great deal of tension when her character left Alcindoro at the table to flirt and even wrestled on the floor with Marcello.

She sang her “Waltz” with bronzed tones that gave the impression she might someday sing heavier music. Her character grew from a spiteful, distraught lover in Act three to a calm, prayerful friend who tried desperately to help Mimi at the end of the opera.

Other Bohemians of Quality

Arizona Opera Studio Artists Rob McGinness, baritone, and Brandon Morales, bass-baritone, were Schaunard and Colline. I’ve heard McGinness sing art songs at an Arizona Opera Bring Bag Concert and he has a glorious light baritone sound which was not as free sounding when he sang Schaunard and his voice had to pierce a full orchestra.

As Colline, Morales sang his “Overcoat Aria” with rugged low tones and the audience received him with bravos.

Veteran singing actor Jake Gardner was an amusing landlord and later a submissive sugar daddy who acted with his voice as well as his body. Michael Sturges was a clown-like Parpignol who had to keep jumping so that the children could not grab the toys on his stick. Seth Kershisnik and Christopher Herrera as the Act three Custom House Officer and Sergeant completed this cast of excellent singers.

Conductor Christopher Allen drew fine virtuosic playing from the Arizona Opera Orchestra. His rendition allowed Puccini’s music to soar into Phoenix Symphony Hall with dramatic, forward-moving tempi and radiant sound. The orchestra was bright when it accompanied the gaiety of Christmas Eve at the Momus Cafe but it darkened with the snowy dawn of Act three. The orchestral sound grew ever more threatening with Mimi’s increasing weakness and it noted her death with considerable percussion.

This was Allen’s debut at AZ Opera and he is undeniably the real deal. There is no doubt that the performance of “La Bohème” was a superb performance and I hope Maestro Allen will be back to lead more such shows in Arizona.